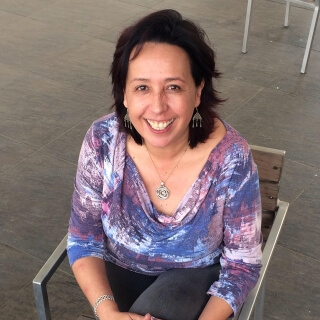 Head of the Department of Science Communication, Institute of Mathematics UNAM

Paloma Zubieta works as a Science Communicator in the Institute of Mathematics of the Autonomous National University of México (UNAM), where she leads a communication project known as "Festival Matemático" (Math Festival), that has the objective of positively changing the public perception of mathematics.


With more than 30 years of experience as a teacher, Paloma started in 2010 with the Math Festival project as an effort of showing to the non-scientific population, who in general don't like mathematics, that maths are involved in our every day and that they are more than just numbers, showing the "fun side" of mathematics. With the six editions of the festival, she has tried to develop with her team an evaluation for each activity, by now, there are more than 30. Also, she has recently focussed on how to evaluate the volunteers and the public impact of the Festival. The festival takes place once per year in México City, but it also goes as often as possible to other cities or communities in México. She teaches young students how to correctly communicate sciences and math and they also help her in this task. Paloma also led the implementation of "Pi Day" five years ago, which takes place each year in the fourteen high schools of the UNAM and some faculties. She has a sponsored project for 2017 with the International Mathematical Union about encouraging women in math.